Women and the Viking World!

Women in the Viking Age enjoyed more freedom and held more power in their society than many other women of their day, they were important entrepreneurs and left a lasting impact on the local languages and cultures of the places where they settled. We constantly get asked questions in Dublinia about the role of Viking women in society, so here are a few bits of information that you might not have heard before.

Love, Marriage and Divorce: Just like today, women in the Viking period were looking for a suitable partner. The sagas are filled with stories of women fighting over who would have the best man. They usually married between the ages of 12 and 15, and usually had a say in the marriage negotiation too. However, as we know love does not always last so it was lucky that the Vikings valued equal opportunities. The Viking woman could choose a husband and later decide not to marry him after all, if she so wished even if it did cause ructions with the family!  Women could also request a divorce and reclaim their dowries if the marriage ended.  If she wanted a divorce, she would call witnesses to her home, and marriage bed, and declare in front of them that she had divorced her husband. The marriage contract usually stated how family property would be divided up in case of a divorce, like a pre-nup today and in the event of death and re-marriage women could become powerful land owners though inheritance if both father and son died in battle, which they often did! 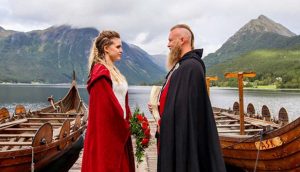 Homemakers and Entrepreneurs: A Viking women’s world centered around the home and the farm. A woman’s work duties were housekeeping, cooking and looking after children and the elderly. A large part of her time was also taken up working wool, spinning yarn, sewing and weaving for the family’s own use. Pregnancy and breastfeeding also took up time in a woman’s life. But when a woman’s husband was off pillaging foreign land, she took over responsibility for the farm, household and trading business. There have even been burials found in Scandinavia with rings of keys, which symbolized their roles and power as household managers.  Archaeology has found that the production of textiles was reserved for women, complicated production styles show that certain women probably specialized in this textile work and they even may have participated in its trade for the sake of their families, like modern day business women.

What did they wear?: Viking women would spin sheep’s wool and fibers from flax plants into yarn or thread, they would then use a spindle wheel, like a weighted stick, to make it into a fabric to make clothes. They typically wore a long woollen overdress suspended with straps decorated in brooches, with a woollen or linen shift or smock underneath. Sometimes it was worn so long that they were tripping over themselves!  Cotton was unknown at the time so that ruled out comfortable underwear! Beads were also popular made from precious and semi precious materials, amber necklace beads, pendants, ear rings and rings were all abundant. Nothing that would look much out of place in modern day Ireland today! 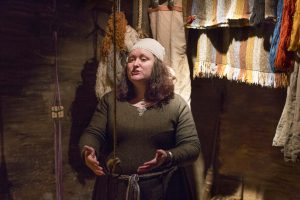 Shield maidens, true or not?: Viking Warrior Women, or shieldmaidens, were women who chose to fight as a warrior in battle. They exist in a lot of Norse folklore and mythology and have been mentioned in some sagas. The historical existence of shieldmaidens is heavily debated but we definitely hope that it’s true! What we do know is that some women made their mark through notable status or achievement. One of these was Aud the Deep Minded. The daughter of a Norwegian chieftain in the Hebrides, she married a Viking based in Dublin and, when both her husband and son died, she took charge of the family fortune and organised a ship to take her and her granddaughters away to Orkney, the Faroes and Iceland. She settled there distributing land to her followers, and was remembered as one of its four most important settlers, and as a notable early Christian. Some woman! 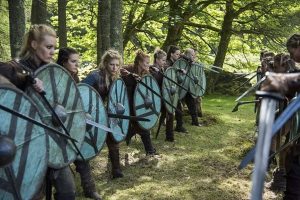