While we’ve been away…

Before and while we’ve been closed, like all other museums, we’ve been doing a bit of re-arranging. A paintjob here, a new exhibition there, and it is all starting to come together now just in time, fingers crossed, to show you all when we re-open again.

So what’s been done?  Well first of all we’ve put in a brand-new exhibition gallery! ‘Dublin becomes a city’. This tells the story of the medieval period when Dublin’s political and military power grew.  Charters, freedom, and liberties were granted to Dublin by successive kings of England. Dublin even became the financial headquarters of the colony. As the merchant and craft guilds grew so too did Dublin’s economic status at home and abroad. But the period was not without its setbacks, there was the burning of Dublin’s suburbs to stop the Scottish Bruce invasion in 1317 and the black death of 1347, tough times indeed! Tension between Dublin’s English rulers and the Irish kings ruling territories outside Dublin’s pale surfaced too throughout the period. 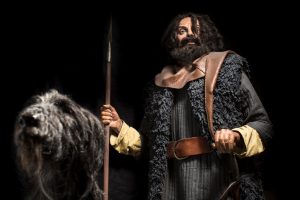 Also, as you may have seen if you visited us last summer, we also installed our AV Curved Screen Theatre. We tell the story here of a Medieval Dublin Merchant, of his life, his family, and his experiences growing up and living in Medieval Dublin, while you take a flying tour of the city over his story. The curved screen draws you in, and really takes you on a journey over some of Dublin’s most famous landmarks, still around today.

We’ve gone super digital!  We have new video character stories, who’ll appear, almost as if in real life, to tell you their stories. We have our Viking Warrior Gunnar, whose remains are also on display in Dublinia, Mayor Thomas Cusack, and the famous Diarmuit Mc Murchada. He was an Irish king who wanted to regain control of his kingdom and also gain control of Dublin.   He invited a group of Anglo-Normans in England, led by Strongbow, to help him.  In return Diarmait gave Strongbow his daughter Aoife’s hand in marriage. A lot of us already know this story, and the beautiful painting of their wedding that hangs in the National Gallery of Ireland.  In the end, the Anglo Normans successully took control of Dublin in 1170.   On Diarmait’s death Strongbow then inherited his power and wealth and control of Dublin.  We also installed new interpretation videos of what happened at Woodquay, a Viking battle Re-enactment, Experimental Archaeology Viking Ship, Living History Crafts in Dublinia and much more.  There are new interactives you can have a play around with on Herbal remedies, Dublin Guilds, Medieval Dublin, Maps and Manuscripts, Street Names and Iconic landmarks in Dublin.

Artefacts  We wanted to make our National Museum of Ireland artefacts a bit more tangible and accessible to you all, and most of all for them to make more sense in situ in the exhibition. We had great help and support from the National Museum on this, who came and installed our new exhibits. We have had new objects like Medieval leather shoes, bone pins, lots of jewelry like amber beads pendants and a jet bracelet. All this alongside our already extensive collection including iron spearheads, shield bosses, Viking combs, the list goes on!  We have placed the human remains of Gunnar, the Viking warrior found near George’s St, and a Medieval woman (who we affectionately call Maggie) found outside the city walls, in new positions within the exhibition, with new information about them! We’re still finding out lots about our artefacts everyday.

Temporary Exhibitions  This is really the exciting part for the future going forward. We now have a dedicated gallery to hosting temporary exhibitions. In fact, we already had our first as some of you may have seen if you visited us last summer.  The exhibition was called ‘Heroes of the Viking World’ and came to us from Jorvik Viking Museum in England.

Visitors explored how Viking heroes were celebrated and commemorated and what archaeological evidence can tell us about their stories. It was told through displays such as Viking-age human remains displaying battle injuries of a warrior, facial reconstruction of a skull with battle wounds, replica objects, and interactive activities. If you visited you might have seen the replica Viking tent too, where one of our Living History experts probably taught you how to play Hnefatafl! We hope in the future to put a lot more exhibitions travelling and temporary exhibitions in this space, the world is our oyster!! Any ideas, make sure and send them our way!