What’s in a building?

As you might know, Dublinia is lucky enough to be housed in a spectacular building in the centre of Dublin. One of the most notable landmark buildings in the oldest part of the city, alongside and connected by a magnificent bridge to Christchurch Cathedral.

Who and why it was built? Our building was originally called the Synod Hall. The Synod Hall is a nineteenth century building designed by George Edmund Street, the same architect who led the restoration of Christ Church Cathedral in the 1870s. The building contains a two-story hall surrounded by many passages and lobbies which are now our exhibition spaces.  For all of you into architecture, it is a robust First Pointed style, with simple buttresses, circular turrets and plate tracery, an element of stonemasonry that supports the glass in a Gothic window.  And we have some amazing windows, a spectacular George Walsh window in our coffee shop and exhibiton, both beautiful stained glass masterpieces! 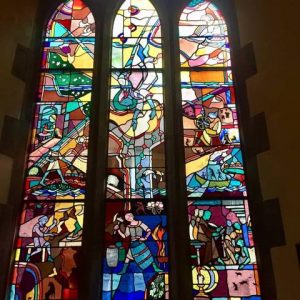 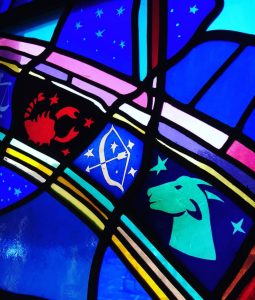 There is a Great Hall on the second floor which is accessed via a contouring stone stairway that would have welcomed Church of Ireland clergy to annual General Synods. An imposing multi-arched wooden roof still exist on the upper level where the words ‘Aye’ and ‘Nae’ can be seen carved over two double doors to facilitate mass voting. There is a fully integrated stone bridge, leading to Christchurch Cathedral, and where our visitors exit the exhibition experience. The old tower of the medieval St Michael’s church was also incorporated into the design of the Synod Hall.  Remnants of the tower’s medieval past can be seen in the footprint of the nineteenth century building. It is now part of the visit to Dublinia where visitors can climb the 96 steps to the top, where you can see the best views of the city. 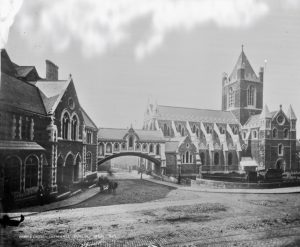 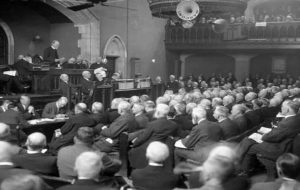 Combat at the Crossroads, Dublinia in 1916 – From the windows of what is now our coffee shop in Dublinia, the crossroads of the medieval city, events that occurred during the 1916 rising for Irish independence took place. From those windows, shots were fired by the Irish Citizen Army at passing British soldiers. After midday on Easter Monday, the armed rebels broke into the building and took up their posts. Tasked with ‘delaying’ the British troops marching to Dublin Castle, they opened fire on them from here.  Three days later they, the rebels left under the cover of darkness. Two had been injured and they were taken care of by people in the local community, while the third rebel carried on fighting towards Dublin Castle until he was arrested.

Nightclub?! – What? I hear you cry! Yes, Dublinia/The Synod Hall was once a nightclub, and one of the best in Dublin apparently, and many a romance started here as we have been told by some of our visitors in the past! The nightclub was called the Cathedral Club and it even appeared on TV. Megamix was a weekly music programme that ran on RTE from November 1986 to April 1988 and its first series was recorded in front of a live audience here, in Dublin’s Cathedral Club! Dublin band Aslan, The Smiths, The Pogues, The Dubliners, and many more all performed here. 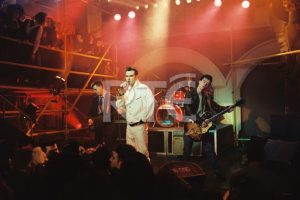 The Smiths performing onstage in 1987

The 90’s – Finally we moved into the 90’s and this is when Dublinia began, in 1993 to be specific. The Medieval Trust, the not for profit parent company of Dublinia, whose principal objectives are research, education and the dissemination of information on Dublin City’s archaeology, Viking and Medieval history, purchased the building in 1991. They undertook a significant restoration programme and later established Dublinia. The Medieval Trust has a continuous upgrade and improvement programme for the landmark building and Dublinia is committed to insuring and protecting them in the long term for the nation as it is such a landmark site in Dublin.

So there you have it, if you live or work in the city you might pass it every day, a brief history of one of the most important, beautiful and photographed buildings in our city.

Picture of The Smiths copyright of RTE and The National Library of Ireland.