Walk where Viking walked before on your visit to Dublin

Dublin’s Viking history is just waiting to be discovered. Just picture the city as it was back then, without the concrete jungle of office blocks and shops, imagine Viking ships sailing up the River Liffey and what they first saw. They have left their legacy behind today, with the remaining Viking sites in Dublin you can see where they made their mark in the city, and its surroundings. Let’s explore what Viking sites remain in the city centre.

The most famous of them all obviously being Wood Quay, the biggest Viking settlement in Dublin.  It is most famous these days for the huge protests starting in 1978 to preserve what would ultimately be significant Viking finds. Plans were made, and followed through, to build Dublin City Councils offices over this important Viking settlement, right at the historic core of Dublin. Thousands of people took to the streets to display their outrage at these plans, although it did not stop the building, but what it did do was allow for more time to carry out excavations on the Viking site. 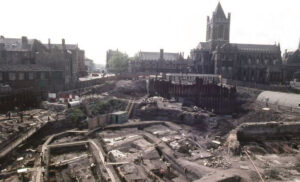 So what did they find?

The most impressive finding was a huge number of Viking houses along modern-day Fishamble Street, over one hundred houses were found, around a fifth of the structures identified across the site. Also found were domestic vessels made of wood and clay, bone and antler combs and leather materials from a cobblers’ workshop and quite a big amount of metal artefacts were also recovered.

At Dublin Castle, the remains of some of Viking Dublin’s original defences were found. These defences take the form of a stone covered embankment, a section of which has been preserved within the huge circular walls of the thirteenth-century Powder Tower. Despite a fire in 1684 that caused damage to much of the building, the parts of the medieval and Viking structures survived and can still be explored by visitors today. 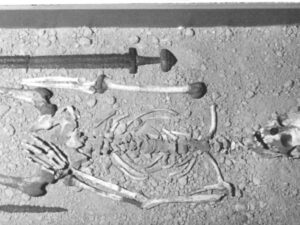 A huge amount of Viking graves were found at Kilmainham and Islandbridge in Dublin. These ninth and tenth century pagan Viking graves were the earliest contacts between the Vikings and Ireland. There were weapons and tools, as well as female items such as brooches found in the graves showing that both men and women were buried there. At least fifty burials were found, making Kilmainham alone the largest Viking cemetery outside of Scandinavia.

Viking sites and finds are all over the city centre of Dublin. Excavations in Golden Lane in 2005 led to the discovery of 272 burials, dating 700-1200 thus taking in the Viking period. Excavation in the 1990s at Castle St and Lord Edward Street revealed the foundations of a number of Viking houses, these houses were slightly bigger than the ones found at Fishamble street, which suggested that whoever lived here was perhaps an upper-class Viking!

There have been more recent discoveries of Viking settlements in Dublin. A well-preserved Viking-era terrace was discovered on a site in Dean Street near the city centre, on the site of plans for a new hotel. The find uncovered a treasure trove of artefacts, including copper alloy, a decorated stick pin, a 12th century copper alloy key and worked bone objects. 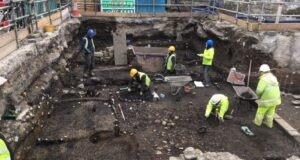 If you want to learn more about the Vikings in Dublin, then Dublinia Viking Museum offers Group Tours, Education Facilities and even Training courses on Cultural & Heritage studies. Plan your visit today, or get in touch with us and one of our Viking experts will contact you directly!