Viking and Medieval Dublin on the streets – Exploring our local area

All roads led to Dublinia in Medieval times! As you all know Dublinia is centered right at the heart of the old Viking and Medieval city, in the middle of Dublin 8. We want to explore our local area and see what famous landmarks are along the way, and find out which of them are not around anymore today.

Dublin 8 is one of the oldest neighbourhoods in the city and it encompasses a huge area. This area takes in some magnificent buildings and gardens, to name but a few, like Dublinia (obviously), Christ Church Cathedral, St Patrick’s Cathedral, Marsh’s Library, Richmond Barracks, Kilmainham Gaol, Heuston Station and the Irish National War Memorial Gardens and it even included one of the largest Viking burial complexes in western Europe at Kilmainham-Islandbridge.

Christchurch Cathedral is probably one of the most recognised parts of Dublin 8 and has appeared in countless selfies by tourists across the world, but what makes it so special to the area. Well, it has stood for over 1000 years which is impressive enough, but its what’s inside that’s really special. There is a medieval crypt, which extends under the entire cathedral and it has amazing architectural features and stone carvings from the 12th century, originally a Viking church, it is also the supposed resting place of Strongbow!

If you Cross over the famous Neo-Gothic archway you will of course enter Dublinia and our exhibition, however what you can’t see on the site of Dublinia today is the medieval parish church of St. Michael. It is first mentioned in 1178 and was one of the smallest churches in the city, It was completely rebuilt in the 1670s and only the original tower survives which you can still climb to the top of when you visit our exhibition! 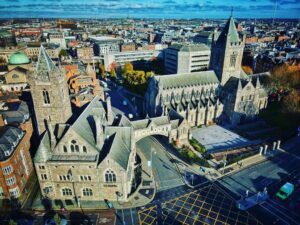 We also have St. Patricks Cathedral, it was built in honour of Saint Patrick between 1220 and 1260 and remains a tribute to Ireland’s patron saint. It was the biggest church in Medieval Ireland at the time, and stood inside its own fortified enclosure, something you don’t see today. This enclosure encompassed important buildings associated with a working cathedral of the time, including the bishops palace of St Sepulchre’s now Kevin St Garda station!

No other town or city at the time had two working Cathedrals, something which makes Dublin 8 quite special!

We all know what happened at Wood Quay, but what other artefacts have been found in Dubin 8. There were approx. 59 Viking graves were found in the Kilmainham-Islandbridge area between the late 18th century and 1934 and some are still even popping up; in 2004, a Viking sword and spearhead were unearthed in the War Memorial Park and human remains of a young male Viking were also later found.

Most recently, some interesting archaeological finds were uncovered at the site of the planned Hodson Bay Dublin Hotel, on Dean Street, in the Coombe. They found an extremely rare copper alloy Viking key, some Viking graffitiin the form of some etching on a slate, and a wattle and post house dating from the Viking period. 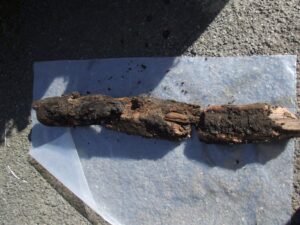 We even had our own archaeological dig in Dublinia back in 2010 when we were in the middle of a refurbishment, in a small area which when dug deeper, we found the post of a Viking house. In other areas, we found a lot of teapots, apothecary bottles, and even a clay pipe from the Land League.

It just goes to show how much of a hotbed of archaeology lies underneath Dublin 8, from Viking times, and before, right up until early modern Irish history.

Of course, Dublin 8 also houses Dublin Castle! The original Dublin castle was built under orders from King John in the early 13th century. That structure was more or less completely destroyed in the 17th century. The last remaining medieval tower is the Record tower in the southeast corner. All the other towers, such as the Powder Tower have been totally destroyed, however beneath it lies substantial remains of the medieval moat and walls, which you can go visit today.

If you’re taking a walk around Dublin 8, have a think about all the street names that you see, and what they might have been back in Viking and Medieval times. Dublinia is situated on Winetavern St, this was a drinking mans paradise at the time. Situated up from the quayside that imported wine and ale from across the continent, its many taverns of this street were its first stop, and for the sailors that brought it here.  Many tavern tokens and drinking jugs have been found in archaeological digs in this area, particularly at Wood Quay.

Fishamble Street gets its name from all the fish markets that were there. A perfect location for a fish market due to its closeness to the River Liffey. Cook Street, which still has surviving parts of the city walls well worth a look, was where all the bakers sold their bread, pies and pastries.  They had to sell their goods outside of the city walls as so many fires would have been a huge risk to the city with its tightly packed timber houses.

There is so much more to Dublin 8 with significant history and buildings, there is a lot to see, so get out there when we can and explore. Take a look at some more things to do in Dublin!

Arms and Armour in Medieval Ireland

Want to know more about arms and armour in Ireland in Medieval Ireland? If so, then come join weapons experts Claoimh and see a wide range of reproductions on display.