We are so lucky to have such an amazing group of Living Historians who work for Dublinia. Dressed in Viking and Medieval costume and armed with some unusual items ranging from Viking and Medieval games, to tablet weaving or even using a quernstone, they demonstrate and explain their crafts, and are absolute experts in it all.  We have specialists on Viking weapons, the history of the barber surgeon, medieval medicine and herbs, and even Hnefatafl (Viking chess!) Where else would you get it? 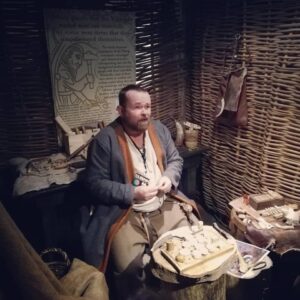 Having received a piece of antler to work with, Lloyd set about reconstructing this antler into a replica artefact. This antler was kindly donated to Dublinia by the OPW team from Phoenix park. The antler was collected by the park rangers during the annual shed, and this was important to ensure that the antler used for any of our replica reconstructions projects was ethically sourced.

Lloyd told us that the aim of the replica reconstruction was to recreate a Viking Decorated Pendant Container.  This object was discovered on Fishamble street. It was made out of an antler tine that had been hollowed out with a small perforation at the top and contains beautiful geometric designs. The real artefact is on permanent display at the National Museum of Ireland in Kildare St. 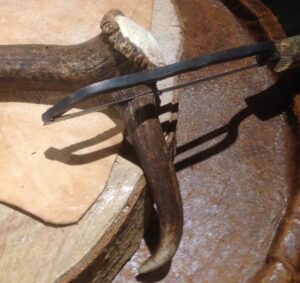 The most interesting part of this reproduction process was the method used, Lloyd produced this using authentic techniques, methods and tools which would have been available to people living in the past! Not an easy feat, and certainly not a timely one.

If you want to find out more about the step by step process of the replica reconstruction project, then click on the following link. Replica Reconstruction Project