It’s that time of year again, and while we can’t bring you our usual Halloween performances, we still have some scary medieval stories to tell, like that of Drunken Thomas! Also, do you want to hear some creepy cures and ridiculous remedies that were used in Medieval Dublin? Read on below…

Drunken Thomas and his grave mistake!

Saint Michael’s graveyard (beside modern day Dublinia) was an especially creepy place, particularly around Halloween, full to the brim with the creaking bones and rotting flesh of the dead.
There was a legend that surrounds the graveyard, and it goes something like this….during Halloween if you were to go to any grave in Saint Michael’s graveyard and stick a knife therein, a hand will reach up out of the grave and grab hold of you, and pull you down!!
There was one brave man who lived near the graveyard, and was scared of nothing, his name was Thomas.  Thomas was known to frequent the taverns of Winetavern Street, and one Halloween night, when full of wine, Thomas with his drunken friend Oliver, stumbled into this graveyard, bold as brass and scared of nothing.
Oliver knew about the legend of the graveyard and told Thomas all about it.  Thomas was bold with drink, and decided to swear a curse on all the dead, so brave was he was on that dark Halloween night. It was very cold and the wind blew viciously, and he pulled his heavy cape around him, and then reached in to that cape and grabbed out his bone-handled knife, a knife that had seen much service, if truth be told.
‘I will show you I fear no man, living or dead,’ he said.
He held the knife above him, and walked up the moonlit hill in his long cape. Stopping at an old grave he looked back, the wind heavy now, so heavy it blew off his leather hat.
‘Don’t do it!’  yelled Oliver. But he did. Drunken Thomas closed his eyes and plunged the knife into the ground. But when he went to step away he could not. Some terrible thing was pulling him back. He screamed for help, but Oliver, in fright for his life, ran away as fast as his legs would carry him.
The next day they found his body next to the grave, the knife stabbing through the tail of his cloak and into the grass.
So, what is the lesson of this Halloween tale? Well, it is often not the dead that harm us, nor indeed the living. There is only one devil to fear, the devil in your head!! 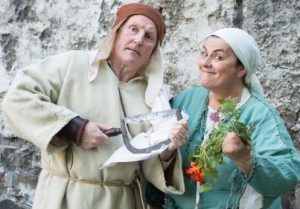 A visit to the Barber surgeon or the Herbalist in Medieval times would usually give you a very painful cure to your ailment, or smelly breath from ingesting some very strange herbal remedies, either way, here are some of the more unusual ones!
Have a headache? Simply cure it by drinking a brew of barley (although we’re pretty sure that’s what may have started the headache in the first place!
Toothache? a visit to the barber surgeon for you, he’ll have it out in no time, no need for any anesthetic!
Earache, easily cured by sticking a clove of garlic in your ear.
Pox? head down to the river and gather up some leeches and simply stick them all over your body, no problem!
Wound, cut yourself? well, heat up a red hot iron and poke it with it, not painful at all I’m sure.
Finally, Leprosy, sorry, no cure for that, unfortunately.