As you know, over the last couple of months we’ve been highlighting some of the other incredible attractions and historic sites Dublin City has to offer visitors, so that once you have visited us here in Dublinia, you know exactly where you want to go next!

This time, we are looking at some fascinating places north of the River Liffey. Read on to find out more…

Telling the story of Ireland’s history carved in stone, Glasnevin Cemetery is home to the burial place of over 1.5 million Dubliners! That means there are more people under the ground in Glasnevin than living in the city today.

With so much history packed into one place, there is naturally a wealth of stories to be told here. From political and revolutionary heroes such as Michael Collins and Eamonn De Valera to poets, writers and sporting greats, there really is something for everyone in Glasnevin.

Their guided tours take in everything from military history to social history and even include a recreation of a graveside oration as well.

If you’re feeling up to the climb after your tour, you can scale the inside of Daniel O’Connells Tower which sits on top of his crypt and the views of the city really are unique! The cemetery has been closed for tourists during the pandemic but is back open at last and definitely one to check out if visiting the city! 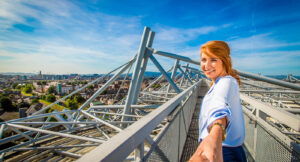 If you have taken the trip out to Glasnevin Cemetery, you should definitely think about a pit stop at Croke Park on your way back into the city centre! Here you can immerse yourself in the completely unique story of Ireland’s national sport, the Gaelic Games.

The GAA has been an intrinsic part of Irish identity since it was founded in 1885 and as a result, it also played a role in the formation of the Irish State in the early 20th century. A visit to Croke Park is not only a visit to a sporting stadium but to the site of one of the most brutal atrocities in the Irish War of Independence.

The museum tells all of these stories and more, while the stadium tour is one of the most state of the art in Europe. Finally, for all sports fans out there, you also get the chance to scale the height of the stadium and actually take a skyline tour on top of the roof itself! Panoramic views of the city, as well as an incredible vantage point across the stadium, make the skyline tour is a thrilling walk of Ireland’s cultural history. 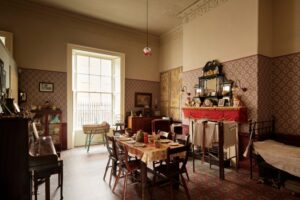 14 Henrietta Street is in an international award-winning museum in the heart of the city centre. A Georgian building, once one of the grandest in Dublin and home to British Diplomats, the building’s chequered history saw it become one of the last remaining tenement buildings in Dublin.

By 1911, over 100 people lived in this single house. Built and restored over 5 floors the museum meticulously recreates different periods in the building’s history, from the Georgian grand staircase and entryway to the tiny, dark and damp basement tenement rooms below. No detail is spared.

Many of the artifacts in the museum belonged to the very families who called Henrietta Street home and an oral history project run by Dublin City Council over the last number of years means Henrietta Street is packed full of stories, belongings, and memories of real people who lived grew up and even died here.

It is a truly emotional visitor attraction that places a sense of community and belonging at its core. An absolute must-see on any trip to Dublin!