Fun and games in Viking and Medieval Dublin

In today’s modern world of gamers, social media, and endless television, we thought we might take a look at some old style games, and see what kind were played by the children in Viking and medieval Dublin.

You’ll be amazed to learn how many games from medieval times are still played today. For a short, nostalgic moment, think back to your childhood summers! Games like hide and seek, tag, hopscotch and marbles were all played by medieval children in Dublin centuries ago and survived up through the years, and surprisingly, little, if anything, about the rules has changed! Girls in medieval Dublin played with dolls made from cloth, wax, wool, wood or clay. Their dolls were dressed in all different kinds of costumes, peasant girls mostly had them dressed in working clothes whereas noble girls’ dolls were dressed in long robes. While boys mostly played with wooden toys carved into swords or horses mostly reflecting the life of warfare that was common to the era.

Ring a ring o’ rosies – One sad story surrounds this popular game of medieval Dublin, Ring around the Rosie was first played in medieval Ireland and England during the great plague in 1665, and possibly even as early as the 1300’s during the Black Death! Have you ever thought about the words? ‘Ring a ring o’ rosies’ – a description of the marks made on the skin by the disease, a ring around a red mark.  ‘A pocket full of posies’ – people at the time believed the plague was passed from person to person by bad smells. Carrying pockets and small pouches filled with herbs and flowers masked the smell of sickness, and they believed it would also protect them from catching the plague itself!  ‘A-tishoo, a-tishoo, we all fall down!’ – sneezing was another symptom of the plague… and falling down refers to the vast number of people who died from the disease…

Medieval Society summed up on a chess board – Not every game came from such sad and tragic origins, and here’s one you might have heard of before! Chess, you’ll be surprised just how much you can tell about Dublin’s medieval society from this board game! Pawns represent medieval serfs, the peasants who worked the land owned by lords. They are the most numerous pieces on the board, and represent the largest part of the medieval population in Ireland. They are placed in front of the larger pieces to protect them, just as serfs would have paid tithes to and fought in the armies of the lords and kings who ruled them.  Bishops are used on the board as the church held an extremely important role in medieval society throughout Ireland and Europe. Their inclusion on the chess board shows that the piece they represent is important and powerful.  The knight can move differently on the board to any other piece, moving further than, and jumping over, other pieces. Some say this represents the horse that a practicing knight would have ridden, galloping across the board, as well as a knight’s skill and agility on a battle field!  You can learn a lot about medieval society from the pieces on a Chess board

Boats, Spinning tops and Swords! – Vikings children had very few toys, and they were usually small, simple items such as wooden horses or boats. Young Viking boys probably also played with wooden swords and spears practicing for the time when they would join their fathers in expeditions and battle.  Some of the toys were also useful to train various skills in children from an early age, for example, a spinning top trained a child’s fingers in the movements to use in spinning. A small toy boat could reflect the wish to travel on an expedition with an adult crew. A wooden sword could be used for training until it was exchanged for an iron one. Play could therefore also be used for more serious purposes. 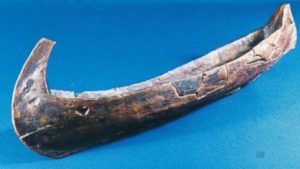 Above is an image of a Viking toy boat.  It was discovered during the National Museum of Ireland’s excavations at Winetavern Street, Dublin, where Dublinia is today. Most likely a toy, it measures approximately 37 cm in length by a maximum of 8.5 cm in width. Originally the boat would have had a mast and a sail too. Dating from the 12th century, the boat was more than likely the prized possession of a child who raced it on the River Liffey or nearby streams.

Viking chess – The Vikings had their own earlier version of chess too called Hnefatafl. This forerunner of chess involves two ‘armies’ of pieces; a small force whose pieces start in the centre of the board and a larger army whose pieces begin on the edge. The object for the smaller group is to escort their king safely to one of the corners of the board; the larger force aim to capture the king! You can even come and play your own game with a real Viking in Dublinia! 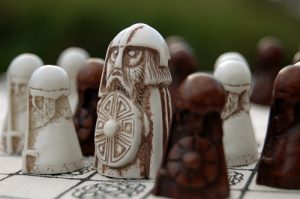 So there you have it, some of the more traditional style games and toys have managed to survive over hundreds of years and are still popular today.