Well, this blog is here to prove that we are none of the above and are in fact a lot more than that!

Here are 5 reasons (although we have a lot more) that we think Dublinia is one of the best museums in Dublin.

We are so lucky to have such an amazing group of Living Historians who work for Dublinia. Dressed in Viking and Medieval costume and armed with some unusual items ranging from Viking and Medieval games, to tablet weaving or even using a quernstone, they demonstrate and explain their crafts, and are absolute experts in it all.

We have specialists on Viking weapons, the history of the barber surgeon, medieval medicine and herbs, and even Hnefatafl (Viking chess!) Where else would you get it? 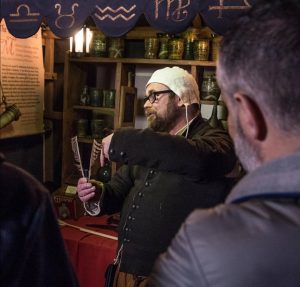 How lucky are we that we get to come to work in such an amazing and historical building every day? Dubliners will know this prominent city centre building as many things over the years, the Synod Hall of Christchurch Cathedral, a nightclub in the 1980s and for many years, an empty beautiful building lying idle in the middle of a bustling city, until we came along in 1993 to turn it into Dublinia.

It’s not just for us though, our exhibitions work around this building, and its beautiful architecture is still on view to see when visitors come to visit, and the original medieval tower of the original St Michael’s church still stands and is part of the visit, a 120 step climb to the top to see Dublin at its best!

A lepers skull, artefacts from Wood Quay, a Viking comb, jewelry, the list goes on. We have an extensive range of artefacts on display in Dublinia, but here are two of our most precious.  We have the remains of a Medieval woman, who we affectionately call Maggie, on display.  She was found as part of the excavations of Dublin historic centre (1974-1981), her remains date from 1100-1200.

Her skeleton was originally found in a quickly dug grave just outside the old Viking walls of the city, she was probably quite poor in life, her bones showed signs of wear and tear and she only had 5 teeth remaining, the rest were lost due to abscesses, think of the pain she must have been in! She was found buried with a rope around her neck, which may have caused her death.

Another is Gunnar, our Viking skeleton, he was found on an excavation site at the offices of Dunnes Stores on George’s Street in Dublin city centre. It is thought that he formed part of an elite warrior force active in Dublin in the early 9th century. We know so much about him, some of the more interesting include that he suffered from severe back pain from a deformity in his lower spine.

We know he was from the northern part of Norway as a result of Isotope Analysis, a process that can identify where people grew up, and he was found with lots of items including a comb and a knife blade, probably used for skinning animals or in defence.

We are a hands on history museum!

Yes we have artefacts that obviously are protected and not for handling, but a lot of our exhibitions are very hands on, you can walk into a Viking house and sit around the fire, or visit a medieval fair and try on some medieval clothing, play some games, and smell the aromas at the spicers stall, or get involved in all of our interactives.

We believe that learning is tangible and fun and we think that the best way to do this is to get stuck in. If anything it creates lots of great photo opportunities! 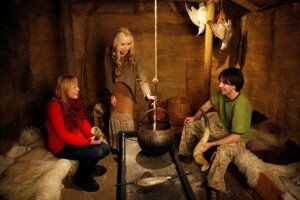 We like to mix things up for our visitors, and especially our Irish ones so that when they re-visit us there is always something new and exciting going on. Our events are quite varied, and range from Viking weapons displays, to medieval cooking, and the Big Dig (archaeology messy fun for kids).

Some of our more interesting events were when we explored some bugs, plants and poo from medieval Dublin, just to see exactly what we ate back then and how it affected us and our gruesome barber surgeon who was always sure to put the scares through our visitors at Halloween.