The 13th century was the time of great medieval fairs all around Europe and in Dublin, merchants from different lands gathered at Dublin’s Fairgreen annually for 15 days each July to trade their goods.

Where was it?: Fairgreen was situated just outside the great western defensive ditch, on the eastern side of present day Francis Street, where the Iveagh Markets building now stands. The right to hold a fair was a very valuable privilege, and it was granted to the city way back in 1215 by King John.

What way did it all work?: The fair always began on the eve of a religious festival and the proceeds from the first two days of the fair was always given to the Archbishop, something that would not go down so well today we think! A charge, or custom as it was called back then, was paid to the keeper of the Fair on all the goods, and people, that entered or left the ground at Fairgreen. Traders, like today, were also charged a stallage fee for setting up their stalls. There was a weigh master at the Fair and it was his job to weigh everything that was to be sold and inspect it for quality and price, much like a market supervisor today. There were even courts in the Fair that dealt swiftly with anyone breaking merchant law, these courts were known as piepowder courts!

Sugar, Scribes and Spices: Food sold at the Fair were prepared by local bakers, whose ovens were located on nearby Cook St, they were situated here to prevent any major fires from spreading to the major part of the city, within the walls. The delicious smelling hot pies were filled with mince meat, fruit, spices, or if you wanted something more savoury, you could have a pie filled with rabbit, pork, venison or sometimes even swan was on the menu. If you were fasting for religious reasons and couldn’t have meat, down at the Quayside, you could get some local cheeses or dried fish from the many ships delivering goods from all over the world. Or if you wanted some fish for your dinner, you could head to the fish markets on what is now called Fishamble Street, for obvious reasons. It was the perfect location for a fish market due to being beside the Liffey. 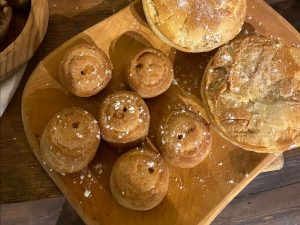 There would often be a Spicers stall too, exotic spices were imported from foreign lands, especially by Italian and Flemish merchants. They were extremely valued for their use in preserving food and for the strong aromatic flavours they gave to elegant dishes. You could buy ready made spices, much like today. These were either poudre douce (mild) or poudre fort (strong) and they were both very popular. Sugar was also imported in small amounts from north Africa, but was used very sparingly. Eventually the word spice came to mean anything luxurious and exotic, from almonds and figs, to perfumes and pigments. 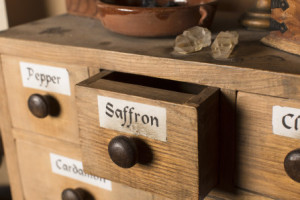 Scribes were also in great demand at the Fair, as very few people could read or write. For a fee they could draft up anything from a will, grants, business contracts, mostly in Latin. Many of the scribes were priests and could even sell you a pardon, granting forgiveness in advance of your sins, all while you were getting a business contract written up!

Cloth was one of the most important products sold at the Fair. Wool would have been imported from England, while fine silks and damasks were brought in from the east by merchants from Italy. Blue was the most common and basic colouring for clothing, but a luxury colour was scarlet, which was made from a particular insect! The Irish loved to wear colourful clothes, especially robes dyed yellow from saffron. They used pins, brooches and buckles from metal or bone for fastening. 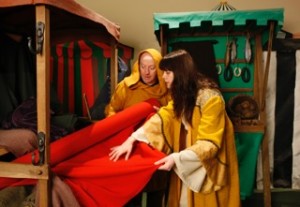 The Fair was a real event for the city, it was where people from all walks of life got together and witnessed the sights, sounds and excitement of the city. The inns that lined Winetavern Street (where Dublinia stands today) would have been full of drinking revellers travelling to see the Fair. There would have been performances on Fairgreen with musicians, dancers, jugglers, and even bears and monkeys, a sight to behold!