Do Christmas traditions somehow come from the Vikings?

As we get ready again for a slightly different Christmas this year we have decided to investigate whether or not any of our typical Christmas traditions originate from the Vikings, and believe it or not, some do!

The Norse god Odin was described as a bearded old man wearing a hat and a cloak, Odin would often ride his eight-legged horse Sleipnir across the midwinter night’s sky, delivering gifts to those down below. Sounds a little familiar doesn’t it? It is argued that our modern Santa Claus is a mix of ancient myths, legends and folklore, the resemblance and connection to the Norse god Odin has many historians believing he could have been the original Santa. 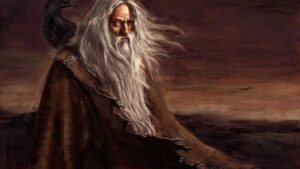 Again, we have Norse mythology to thank for another of our well-known Christmas traditions, the elf. Known as the álfar, where the word ‘elf’ comes from, or ‘hidden people’, these supernatural humanlike beings were said to be tall, pale and beautiful, with magical powers.  So how did we go from the álfar to the traditional elves we imagine in Santa’s workshop today? Well, we have another myth from Nordic folklore to thank, that of the ‘nisse’. The nisse is a mythological creature linked with the winter solstice and Christmas season, who looks like your typical garden gnome – short with a red pointy hat!  The little creatures were said to live in the stables and barns of a homestead, guarding the property within. Treat it well and it’ll be helpful to you, treat it badly and be prepared for some mischief around your house, perhaps explaining why today’s Christmas elves are often represented as being cheeky.

This also had mythical importance. Another Norse legend told of how the god of light, Balder, was killed by an arrow of mistletoe but was resurrected when his mother’s tears turned the berries of the plant red. It then represented resurrection and hope for the end of winter. 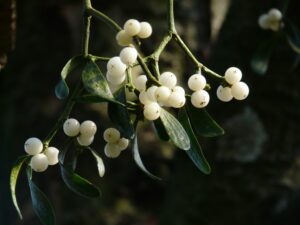 The Vikings worshipped trees, especially the evergreens of the expansive Scandinavian forests. They believed they were the special plant of Balder, the sun god. The trees remained green throughout the winter and came to represent the promise of new life, a reminder that spring was just around the corner. In ancient Germanic and Norse tradition, the evergreens were often decorated with small carvings of the gods and food, in the hope of encouraging the tree spirits to return to bring about the new spring.

Whilst the Romans originally created wreaths to be displayed as a symbol of victory, they became connected to our festive celebrations by way of Yule. Wreaths were created using an evergreen plant like Holly and would be brought into people’s homes during Yuletide to remind them of the warmer days to come, a comforting symbol during the long cold winters of the Scandinavian north.  The Vikings themselves would set alight to a ‘sunwheel’, which strongly resembles modern wreaths The burning wheel was then rolled down a hill in the hope of inviting the sun to return.

In Nordic tradition, the Yule log was a carefully selected log that was ceremonially brought into the house and burnt on a hearth during the time of Yule. Part of it would be saved and kept until the following year to not only protect the home but also act as firewood for the following year’s Yule log.  The Yule goat was one of the most important parts of the Viking Yule. It was related to a pair of goats belonging to Thor God of Thunder and Lightning. In Norse mythology, these goats pulled the chariot through the sky making the sound of thunder Whilst the tradition continues to this day across the world, it has also transformed into a culinary one with many people eating a chocolate Yule log instead! 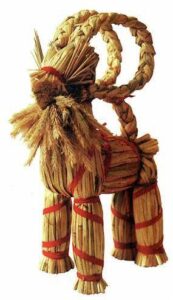 The 12 days of Christmas

Before our beloved popular tune came about, the ancient Norse were enjoying their midwinter festival of Yule for exactly twelve days. Beginning on the day of the winter solstice (the longest day and night), the festivities would carry on for 12 days, creating the origins of the 12 days of Christmas that we celebrate today.

It’s a dish that’s featured on most Christmas tables and once again, we have the Norse to thank for our Christmas ham. Feasting played a central role in the way the Vikings honoured the gods, one ritual saw the sacrificing of a Wild Boar to the Norse god Freyr in the hope of a fruitful harvest during the next season. It would be the centrepiece of the feasting, much like the Christmas ham that is on our modern-day tables today

Christmas is coming! Why not enjoy a family Viking adventure at Dublinia and have some safe and socially distanced fun this weekend. Also, we’ll be open that little bit extra between Christmas and New Years, we’re closed from December 24th to December 26th inclusive but then back open the 27th of December to the 2nd of January inclusive with lots going on!

Source: Sky History – How the Vikings gave us Christmas